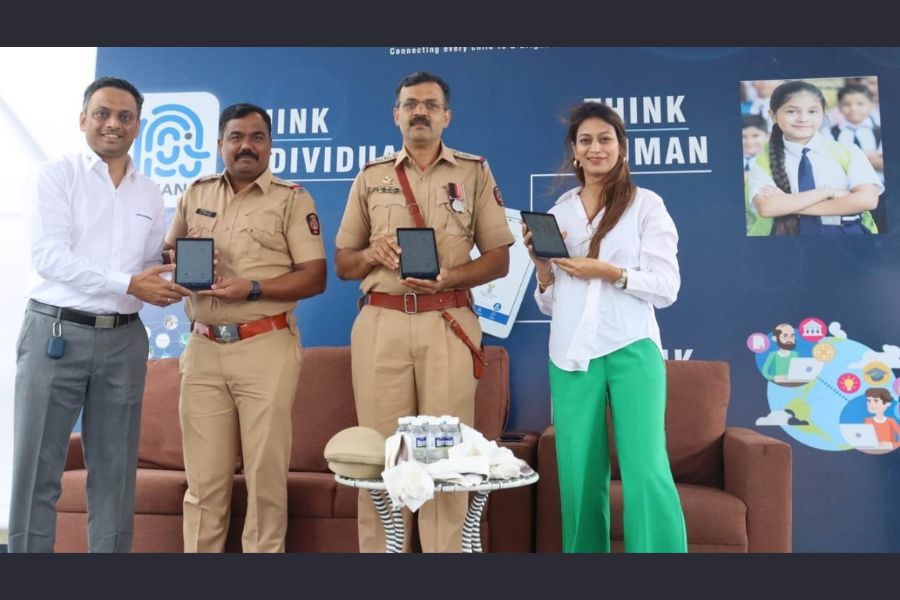 After the formal introduction of the guests, Jendamark India CEO & MD Mr. Himanshu Jadhav formally welcomed all the dignitaries present on the dais and Employees of the Jendamark India family. Himanshu described tech developed for the manufacturing sector under the pioneering of Jendamark as the base on which Odin Education was developed. The objective of Odin Education is to bring underprivileged children from small towns and villages to equal standing with students from big cities. “As India aspires to be a developed nation, we cannot have knowledge limited to cities only. Odin education makes unlimited knowledge backed by our Tech platform accessible to all,” notes Mr. Himanshu Jadhav.

Odin’s foremost motive is to embolden and propagate worldly knowledge to the underprivileged children in regions and hamlets disassociated and isolated from the booming and glorious connectivity of the cities and towns. Such villages and unconnected areas consist of over 70% of the Indian population, and the potential of such aforementioned children is limitless.

With enough resources and provisions provided by Odin education solutions and their partnered NGOs, the underprivileged, as a word, may cease to exist in the coming years. All content provided by Odin is morally and socially acceptable and child-friendly, unadulterated, and free of the malignance so portrayed by our world internet today. Deemed fit as a technologically sound system, Odin has proved efficaciously, as an efficient e-learning platform, through pilot research done in 1 village for over six months.

Odin solutions use an AI much like the heavily applauded ‘algorithm’ used on various social media websites and YouTube. This Algorithm directs students to their areas of interest by providing weblinks and content via the internet that are both age and standard-appropriate. Odin is unique in the way that tablets are given to children with the software pre-downloaded; the time spent by each child is mentioned and noted. This helps in identifying the area of interest. Moreover, Odin is suited and facilitated to the respective board under which a student is undergoing education; SSC, CBSE, ICSE, etc. All boards are omnipotent and an integral part of Odin. All information provided is syllabus compliant, and necessary steps are taken to simulate students’ passion for researching their topics with limitless depth. This also indirectly works as a psychometric test that encapsulates aptitude and guides children’s needs. Parents and teachers will be duly informed about their ward’s abilities in specific subjects and future career paths that they may pursue. Students can also ask for queries and more information the highly qualified Jendamark team at the back end will provide.

Mr. Nishikant Jangam, responsible for promoting Odin Education in India, explained how Odin Education works and empowers individual users. Jendamark’s supplier partners were felicitated by Mr. Himanshu and his team as they handed over commitment letters to donate their CSR fund to distribute tablets. Mrs Sayali Mahajan, head of Marketing, briefed ODIN Education’s business model and explained the types of sponsorship models and benefits to sponsors. She also announced the formation of an NGO called “Omang Trust”, which will collect donations and issue 12A & 80G certificates to clients.

Police Inspector Mr Sachin Patil appreciated efforts put in by Jendamark to develop this platform for underprivileged children. At the same time, Mrs WestIndia Shweta Anirudh highlighted how this platform had helped students from remote areas to learn new things, which without Odin Education was not possible.

In the end, Mr Himanshu Jadhav offered a vote of thanks to all dignitaries. He thanked all the invited guests and employees for gracing the occasion with their solemn presence.

Today approximately 50% of our country owns smartphones, and therefore bound access to the internet. Back in 2007, less than 5% had this fortuitous technology; and estimations show that by 2030 the numbers will have exceeded over 100 crores that actively use the internet. Thus Odin and Jendamark, with an undying flame of graciousness over the underprivileged, want to head the stalwart yet herculean task of overcoming uneducated minds and moulding them as bright netizens of India and in attachment to our Earth. May this noble cause be ever successful.